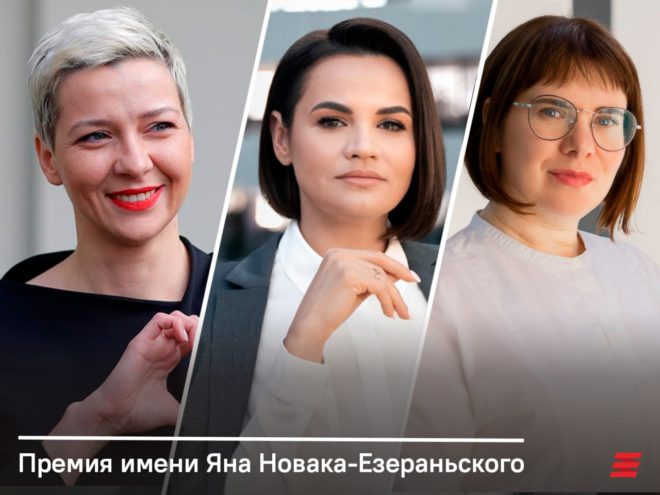 Yesterday in Wroclaw, the ceremony of awarding the Polish national prize for social and political activity and services to civil society was held.

The Novak-Jezeranjski Prize has been awarded since 2004. Before that, it was awarded every year to one person, but this time the jury decided to follow a different principle since the Belarusian movement for democracy is specific.

Svetlana Tikhanovskaya, a member of the Presidium of the Coordination Council Olga Kovalkova, and Maria Kalesnikava’s sister Tatyana Khomich came to the award ceremony.

– Unfortunately, Maria cannot be with us today. She has been held hostage for 9 months. But I can feel her invincible spirit. She will definitely be released, like the rest of the political prisoners, said Svetlana Tikhanovskaya.

The jury of the competition notes that the prize is not only a symbolic award for the heroic struggle for freedom but also an expression of solidarity between Polish society and Belarusians.

In addition to participating in the presentation ceremony, during her visit to Poland, Svetlana Tikhanovskaya, together with representatives of the Coordination Council and the People’s Anti-Crisis Administration, took part in a large action of the Belarusian diaspora in the center of Warsaw, the opening of a memorial of Belarusian solidarity, and also met with Polish President Andrzej Duda.

Tikhanovskaya thanked Duda for the Aid Plan for Democratic Belarus, initiated by Poland and adopted by the EU, and all-around assistance to Belarus: Kalinovsky’s program, support for independent media, including Belsat, assistance to people and businesses that had to relocate.

Svetlana Tikhanovskaya noted the inadmissibility of trade-in of political prisoners:

– All innocent people should be released. This cannot be a subject of bargaining, Svetlana summed up.