The only right thing to do. Nadezhda Ostapchuk on the cancellation of the World Hockey Championship 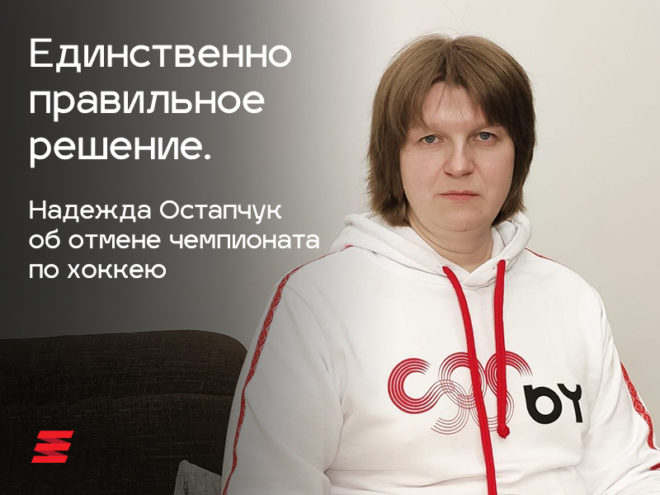 – World Championship is a holiday, and the World Hockey holiday cannot be held in such a stressful environment as in Belarus. – Olympic champion, member of the Coordination Council Nadezhda Ostapchuk commented on the decision of the International Ice Hockey Federation (IIHF).

– The IIHF council made the only correct decision. It was impossible not to hear tens of thousands of appeals from our citizens to not hold a World Championship in Minsk.

Nadezhda also noted the international support for Belarusians fighting for their rights. Representatives of European countries, Canada, and the United States Congress sent letters to the Federation. A large number of famous people from different countries got in on the act.

Nadezhda Ostapchuk is convinced that the decision to cancel the championship could have been taken much earlier. The arrival of René Fasel, President of the International Hockey Federation, only damaged the reputation of the IIHF.

– The Belarusian Sports Solidarity Fund has done a great job and handed over to the international federation a large amount of material with facts and evidence that was more than enough to make the right decision. But unfortunately, Fasel’s ambition and strange relationship with the regime almost led to the collapse of the international hockey federation itself. Key sponsors began to refuse to support the IIHF due to the World Cup in Minsk, a heavy toll on the reputation of the international federation was exact. Now the IIHF has a lot of work ahead to get out of the current crisis and even more difficult to restore the confidence of fans and hockey fans.