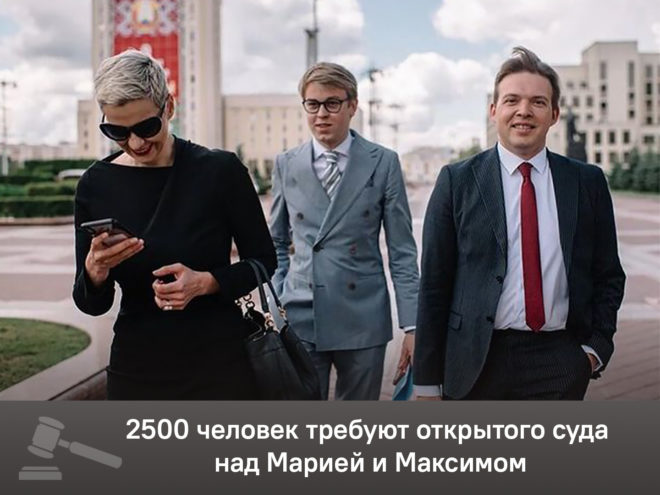 On August 4, the trial of Maria Kalesnikava and Maxim Znak, members of the Presidium of the CC, will begin in a closed session. The headquarters of Viktor Babariko initiated an open letter to call on the Investigative Committee, the General Prosecutor’s Office, the Supreme Court, and the Administration of the President of Belarus to open the proceedings.

More than 2,500 people have already signed an appeal to the authorities. The personal data of the signatories is not transmitted anywhere. Public access is limited to the names of celebrities who have consented. You can also support our heroes with your signature. It won’t take more than two minutes.

And this photo is of Maria, Maxim and former Maria’s lawyer Ilya Salei. It was taken in the summer of 2020 after filing papers with the CEC.

–  We smile because we absolutely believe in the law, justice and a better future for Belarus – tells in own Instagram Ilya Salei. – A closed trial means that a huge number of people who will follow the process, regardless of their political views and preferences, will not be able to form their own opinions about the proof of guilt of Maria and Maxim and the overall legality of what is happening.

And as far as Maria and Maxim are concerned, these are some of the most honest and sincere people I have ever known, who truly love Belarus and certainly cannot threaten it, and, above all, still believe in a better future.

You can sign an application to the authorities and follow the number of signatures on the site.