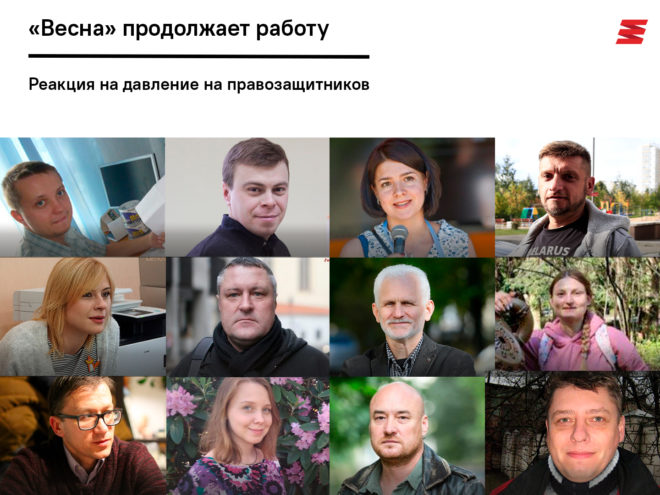 Ten days ago, offices of non-governmental organizations were searched throughout the country and their leaders and members were detained. Ales Belyatsky, a member of the CC, the chairman of the human rights center “Spring” and two other “springmen” are still imprisoned.

On Friday, pressure on Belarusian non-governmental organizations intensified, with 48 NGOs announced to be disbanded, including the Lawtrend Legal Information Center, the Human Constanta Human Rights Center, and the Office for the Rights of Persons with Disabilities.

Employees of the deregistered human rights center “Spring”, despite pressure on colleagues, continue their work:

–  We strongly protest against the new wave of repression against members of the organization and civil society of Belarus as a whole and declare that we will not stop our human rights activities, – declare in “Spring”.

Amnesty International called on the international community to respond to pressure on non-governmental organizations in Belarus by contacting the Office of the Procurator-General.

The Observatory for the Protection of Human Rights condemned the mass searches and detentions of human rights defenders and journalists.

The EU High Representative, Josep Borrell, made a statement in connection with the attack on independent organizations in Belarus.

The UN High Commissioner for Human Rights, Michel Bachelet, called on the government to stop the policy of intimidation and harassment of civil society and media workers.

The German-Swiss human rights organization Libereco-Partnership for Human Rights called for a stronger response from the international community in support of Belarusian NGOs.

Russian human rights defenders made a statement in support of Belarusian colleagues.

Front Line Defenders called on the Belarusian authorities to immediately release human rights defenders, drop the charges against them, and stop the prosecution.