We are the ones who want to negotiate. Press conference of Coordination Council 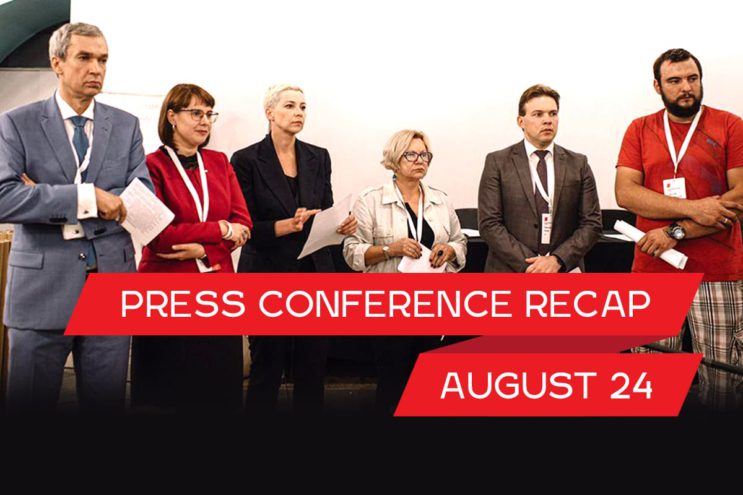 On 24 August, the Coordination Council held a press conference.

These are the main points.

I would like to remind you that from the very beginning, the Coordination Council (CC) stated in its first resolution that we are not pursuing the political goal of gaining power. We are a civic platform that brings together different social groups. And our only goal is to organise a peaceful dialogue with the authorities in order to discuss the crisis in Belarus.

However, we are under pressure. This morning, two members of the Presidium of the​ CC were detained: Volha Kavalkova and Siarhei Dyleuski. They are charged with an administrative infraction. Today, I am summoned to the Investigative Committee at three o’clock. We believe that these actions of the authorities are absolutely illegal; we are negotiators, we are the people who are ready to discuss the situation in the country, especially since the European Council has asked to provide Presidium members with some security guarantees. However, these requests have been ignored and we are under pressure.

Every citizen of the Republic of Belarus who defends their position can take many legal and peaceful actions to make their voice heard, to ensure that the events that occurred are investigated thoroughly. I will not talk about all the legal methods; I will focus only on one thing –​ the procedure that can and should be carried out. This is ​the procedure of​  recalling a deputy –​ both members of the Parliament and local councils​.​

The deputy is a representative of the people. In a situation when presidential elections are held and there are many claims against its organisation, the Parliament, in fact, remains the body that can and should express its position as well as take the steps required by the Constitution to resolve this situation. Therefore, we have drawn attention to the fact that in accordance with the law, any citizen of the Republic of Belarus who has lost confidence in their deputy or sees that a deputy is not performing their duties can initiate the recall of the deputy. This is an incredibly challenging procedure.​ Once again, we must admit the fact that our electoral legislation is not easy at all; we have formal procedures, approval procedures. But as we keep saying since May: if the​ path is challenging, it doesn’t mean that you don’t have to follow it.

The actions to be taken are simple and clear; they are specified in the legislation, they​ are absolutely legal, and no claims can be made against those who will take these actions from the point of view of current legislation. What does it look like in general? Civil society initiatives have already published detailed instructions and even created forms for the automatic preparation of documents; that is, it is not the CC that is in charge of all this, and we see that the process has already started and people have already been working on this issue.

What does it look like in general? When it comes to the House of Representatives,​ the first thing is to collect applications from at least 150 voters in a given constituency. Voters say: “We want to raise the question of recalling our deputy.” They send these applications to the local Council of Deputies. Then the local council must agree on the time and place of the constituency meeting and invite the deputy himself. The place and time of the meeting are announced 10-30 days in advance. At least 300 voters should be present at the meeting and they will decide whether to start the procedure or not. They form an initiative group. Then the Central Committee registers it. The group begins to collect signatures for the recalling of the deputy. The rest is done in the same way as the election campaign: signatures are collected, then checked, and then a vote is scheduled.

The procedure is quite intricate, but all the details are spelled out and people can already start carrying it out. Apart from that, we are hoping that the deputies who are​ members of Parliament will take real action and steps to resolve the situation.

At a meeting with voters, they can say: “Dear voters, we understand everything, and we have taken the following actions.”

Besides that, there are many other initiatives that are legal and lawful, which can also be welcomed, but we will not dwell on them in detail now.

First of all, I would like to wholeheartedly thank all the Belarusian people who have not given up during all these months. The things we are witnessing now are unique; we can see how an active civil majority is being formed. All week long they have tried to intimidate us, they have tried to undermine our spirit. We have seen how they expend our money, the money of Belarusian taxpayers, on merry-go-round buses and people with flags and identical banners.

We are peaceful and consolidated citizens who demand respect for ourselves, who demand that our voice – ​the voice of the majority ​ – ​be heard.​

I would also like to comment on yesterday’s events, because we think it is very strange when a person governing the state lets himself run around in very strange clothes with a very strange weapon in the centre of Minsk. His claims about weapons rattling on the border with Belarus… In fact, yesterday you saw that he was the one who rattled the weapons in the centre of Minsk. And it is also very strange: if he thinks he was chosen by 80% of the Belarusian people, why is he hiding in fear behind barbed wire and chains of men, as he did yesterday. And I would like to draw attention to the fact that the transfer of weapons to a minor requires inspection and a response from competent authorities.

For all of us, it is a fact that Belarus has changed. The authorities will have to look​ for a way out and will have to enter into dialogue with us. If they think that it is possible to forget all these atrocities, tortures, all acts of violence against civilians, election fraud, and that everyone’s vote was stolen – if​   they think they can let the matter rest, then they​ are very much mistaken. We know for sure that the will of the people will be heard.

First of all, I would like to express my solidarity with my colleagues who were detained today near the Minsk Tractor Works, as well as with those colleagues who have already been summoned and will be summoned to the Investigative Committee of Belarus. We​ have repeatedly emphasised that the CC was created for dialogue, the CC is a kind​  of public platform that accumulates the aspirations that have been put forward by the citizens of our country during numerous demonstrations. We see how many people are in favour of dialogue and want to realise their requirements in the life of our country. And rejection of this fact does not suit the interests of our society.

Yesterday, we read the statement and comments of the Minister of Foreign Affairs of the Russian Federation Sergey Lavrov very carefully. We noted that Russia has questions regarding the formation of the CC. Moreover, for some reason, the thesis imposed is that the CC pursues some goals aimed at worsening relations with the Russian Federation. Today, the Kremlin spokesman Dmitry Peskov also made a statement. He stressed that there were some “documents created by these people (members of the CC, as I understand it), showing that the focus was shifted away from interaction with Russia. Such forces are less appealing to us.”

I would like to note that the CC has never considered or accepted – ​ ​and does not plan to accept – ​documents that would indicate that we are not interested in developing relations with the Russian Federation, or that we are interested in leaving some organisations that exist today. We do not deal with foreign policy issues at the CC.​  In fact, we are forced to react to foreign policy issues and such statements.

I don’t know what nationalists or messages of the CC about worsening relations with Russia they are talking about. We would be incredibly grateful to our Russian friends if they provided such a document, if they provided the sources of this document. Neither the members of the CC nor the CC as a whole has developed such documents.

The fact of recognition of the CC also appears in the statements of the official representative of the EU High Commissioner for Foreign Affairs and Security Policy. The EU, as our western partner, has repeatedly stated the importance of providing guarantees to the CC.

We emphasise our position once again: the issue of overcoming the political crisis in Belarus is in the plane of internal political affairs of our country and depends primarily on the Belarusian society. We are interested in developing and​ establishing good relations with all our neighbours.

We are not interested in changing the foreign policy agenda of our country in any way. We have no authority to do this. We are talking about the fact that our country should have a platform where elections will be free and there will be various political forces advocating deeper relations with Russia, deeper relations with the EU, or equal relations with both Russia and the EU. And then people will vote on what foreign policy strategy and domestic policy strategy they will support. The political force that comes to power will implement it. And we do not raise this question ourselves.

As of today, we already have 600 CC members. More and more citizens of Belarus are ready to participate in the work of the CC. This is also extremely important public support for us. Our aim is neither to change the constitutional order nor to replace​ any power; we are the only instrument for establishing and developing dialogue today. And we are ready for dialogue. If there will be other mechanisms and tools, we​ do not have exclusive rights, so let’s discuss, let’s cooperate with them. But so far, there is no such tool on the public platform.