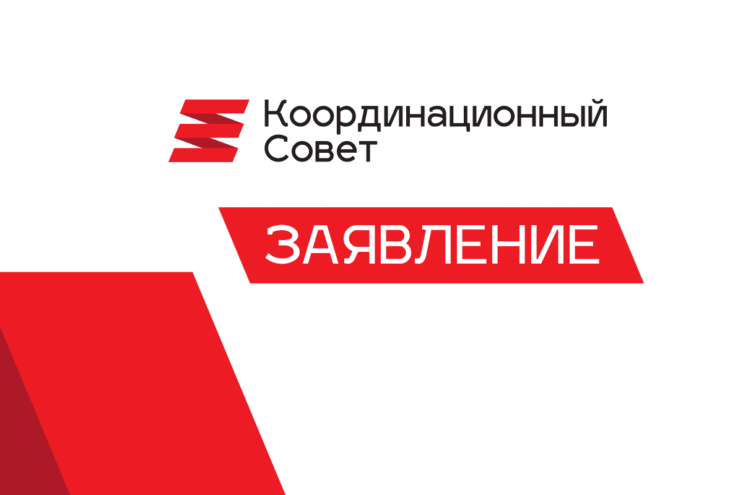 During the past month we have seen brutal detentions of activists, participants of peaceful protests and bystanders, students, residents of the Minks tractor factory village, residents of the city of Grodna, employees of the water rescue organization, cafe visitors, and many others. Additionally, there has been pressure on the Coordination Council. Member of the Board of the Council Maria Kalesnikava, press secretary Anton Radnenkou, and executive secretary Ivan Kraucou were abducted on September 7th. Volga Kavalkova, a member of the Board of the Council, was removed from the country by force on September 5th. Charges were brought against member of the Board of the Council Lilia Vlasava on August 31st. Another member of the Board, Siarhey Dyleuski, has been under administrative arrest since August 24th. Taking into account all of the above, the Coordination Council considers it necessary to make the following statement.

Peaceful protests taking place all over Belarus since August 9th and representing the opinion of the majority are so large that the authorities resort to methods of terror to suppress them.

Trying to intimidate people and force them to refrain from publicly expressing their opinion, the authorities persecute activists and detain bystanders with cruelty and the use of special police gear.

It is obvious that such methods are illegal and cannot lead to any other result but aggravate the situation and deepen the crisis.

Peaceful protests are decentralized and do not have leaders. Terror tactics against participants are useless. Rather than fearing violence from the authorities, people fear living in a lawless state if the situation in the country does not change and the order and democracy are not restored.

Later today the Coordination Council will submit a petition to the Investigative Committee, demanding inquiry into unlawful actions by law enforcement on September 6th and on other days.

The petition pays special attention to the actions of a group of unidentified people near 3 Pobediteley Avenue on September 6th. Those people did not wear official uniforms and did not have any official insignia. Without voicing any demands and presenting IDs and documentation, they demonstrated various weapons and used special police gear to assault peaceful protesters. According to the statement from Ministry of Internal Affairs press secretary O. Chemodanova, the members of the group belong to law enforcement. The head of the Ministry’s organized crime and corruption department N. Karpenkov coordinated the group’s actions and personally broke the glass door of a cafe on Pobediteley Avenue.

The use of special police gear against peaceful protesters, bystanders, those who do not resist detention, and especially to those who are lying on the ground to demonstrate peaceful intentions is a clear instance of abuse of power (Article 426 of the Criminal Code).

It is necessary to determine what the purpose of such unlawful orders was – to punish people for having a civil position, to intimidate them, or to provoke an illegal response. Such a determination is important, since each case leads to specific liability implications.

We also believe that those who exert violence while acting in official capacity in order to punish someone for their political views incur additional liability (Article 128 of the Criminal Code).

If violence is exerted in order to instill fear or force citizens to abandon their political and/or civil activities, and such actions are performed with a threat to people or with a threat of grave consequences, it can be considered as acts of terrorism (Article 289 of the Criminal Code).

If members of law enforcement use unjustified violence in order to provoke a violent response from peaceful protesters and thus justify the subsequent use of force, then such actions might be considered as an attempt to incite social discord (Article 130 of the Criminal Code).

The Coordination Council notes that all actions performed by people acting in official capacity, related to the use of violence, and intended to suppress political and civil activities of citizens are crimes against people’s safety. Such cases have no statute of limitations and are prosecuted in any country. The Coordination Council reminds that the execution of deliberately criminal orders does not free the executor from liability, while refusing to follow such orders is lawful.

The Coordination Council once again calls on the authorities to recognize the obvious and begin restoring the rule of law and the status of Belarus as a democratic state.

To take measures to overcome the crisis and demonstrate the beginning of the process of complying with the demands formulated by the Coordination Council, the following steps should be taken immediately:

The Coordination Council asks citizens not to succumb to provocations, not to resort to violence in response to violence, and to seek to bring all criminals to justice solely by law.

News
Statements of the CC#voiceofCouncilPolitical prisoners